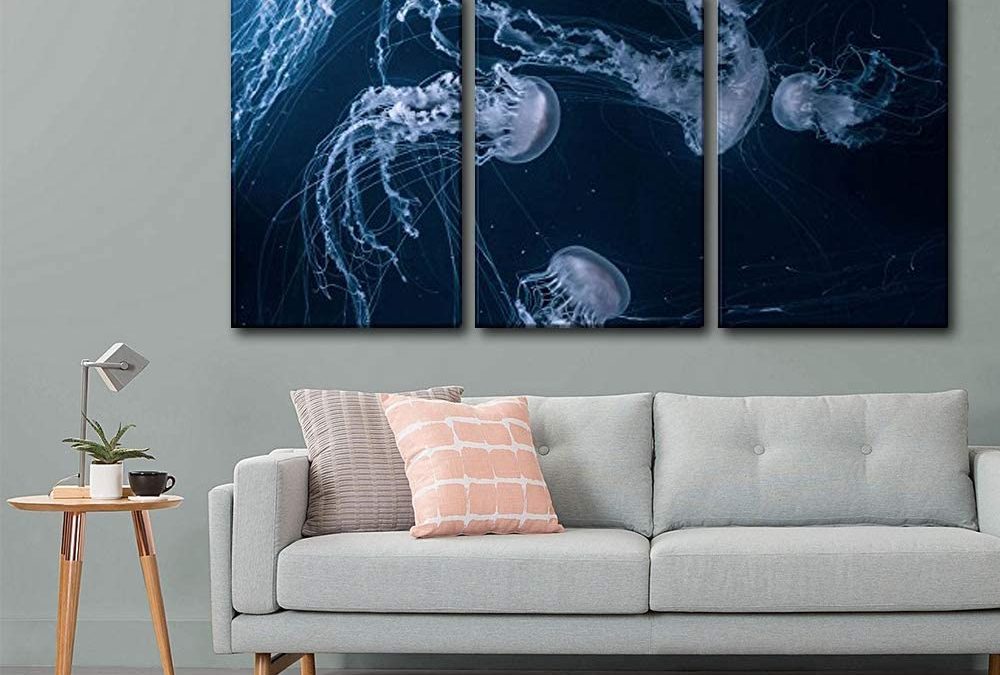 Jellyfish are some of the most unusual ocean creatures. Adorned with creepy tentacles and often translucent, these animals are captivating yet eerie. Did you know that jellyfish are among the most ancient animals on this planet? They have been part of oceanic environments for, at minimum, 500 million years. Some anthropologists have even theorized that that jellyfish may date back to as far as 700 million years ago. To put that into perspective, jellyfish are about three times the age of the very first dinosaurs! They’re also one of the most diverse animal species we have; most animals that are called jellyfish are part of the animal phylum called “Cnidaria,” which includes over 10,000 species. Interested in knowing more about these strange animals? Read below for jellyfish wall art facts. 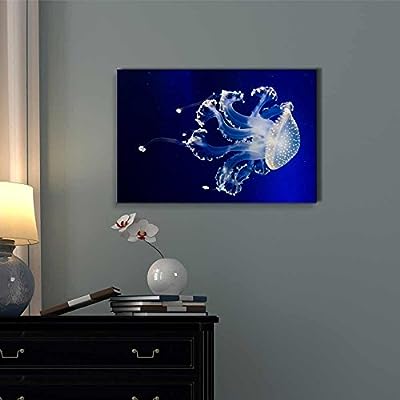 While looking at jellyfish, have you ever pondered exactly what they’re made of? They have no bones! They don’t have any cartilage! So what exactly is going on in their bodies? Well, jellyfish are mostly composed of water. In fact, about 95% of their bodies are actually just water. As previously stated, they don’t have bones, cartilage, blood, or brains. Most jellyfish, save for box jellyfish, don’t have eyes either. Their “mouths” are used for both eating and eliminating waste. We know, that’s gross! Are you wondering how they navigate or search for prey? The surprising answer is: they don’t! Jellyfish are driven by the current of the water they are in. Some jellyfish have the ability to change their depths. In other words, change their direction vertically. Jellyfish do not hunt for prey, either. Their tentacles simply flow and touch potential food items that they come across, making each time a jellyfish eats an opportunistic event. Read below for more jellyfish wall art facts. 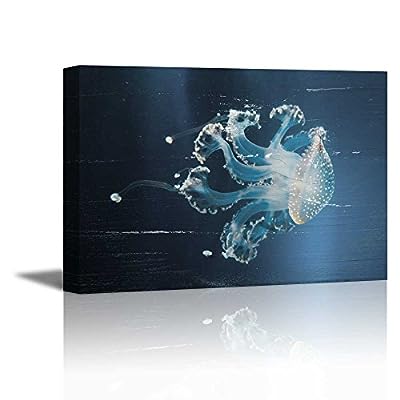 Box jellyfish are known as the most advanced jellyfish species in the ocean. Unlike most jellyfish, this species has a set of eyes. Interestingly enough, they’re eyes are almost as sophisticated as ours! Each eye contains a cornea, iris, lens and retina! That said, they don’t have a brain or central nervous system. Instead of drifting with the current like other species of jellyfish, box jellies have the ability to propel themselves through the water. Wondering how fast? They can propel themselves at the rate of up to 4 knots, which is equivalent to about 4 miles per hour. Box jellies are also the deadliest jellyfish in existence. Researcher state that one box jelly has enough venom inside of its body at any given time to kill up to 60 people. When humans are stung by box jellies, they often experience heart failure. Many humans that have been stung while in the water have been known to drown and die. Whenever a stung person does survive, the pain they experience can often last for weeks! Read below for more jellyfish wall art facts. 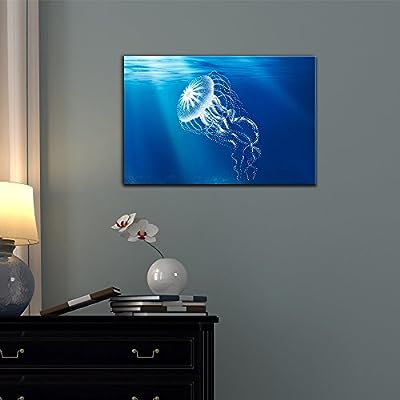 Thanks to the global climate crisis, destruction of coral reefs, and rapid deforestation, many animal species are declining. This unfortunate epidemic of animal death is depressing. That said, not every animal is going through this. Scientists have reported that not only are jellyfish reproducing rapidly, they’re also reproducing in rather unusual places. Jellyfish recently caused a power outage in the Philippines when they got sucked into the cooling pipes of a massive power plants. In fact, Scotland and Sweden have had multiple power plants shut down for the exact same reason. Nobody knows what attracts jellyfish to swarm and reproduce around places like these, but it’s becoming a problem. An explanation for this rapid growth? Global warming is causing ocean waters to become hotter and more acidic, killing off many jellyfish predators that previously controlled jelly populations. Read below for more jellyfish wall art facts. 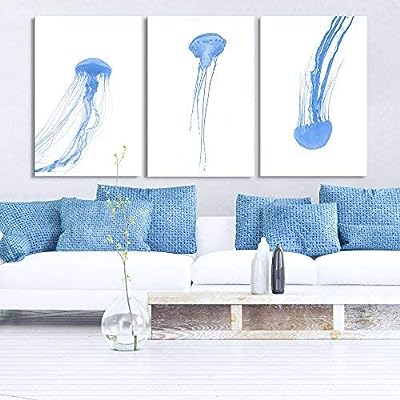 Now that we’ve covered the box jelly, why not give a moment to talk about a few other jellyfish species? The cauliflower jellyfish, named for the strange, white spots on its “head”, is a large oceanic species in the Atlantic ocean. They’re a culinary delicacy in China and Japan, and are also treasured for their medicinal properties. The black sea nettle species is one of the most beautiful jellyfish. Despite its name, it’s actually a vibrant red color. Found in the Pacific ocean near Southern California, its arms can be upwards of 20 feet long and its stinging tentacles extend to 25 feet long. The largest currently known jellyfish species is the lion’s mane jellyfish. It’s able to grow six and a half feet long. It’s name comes from the hundreds of thin red tentacles that are divided into eight clusters on its bottom half. Read below for more jellyfish wall art facts. 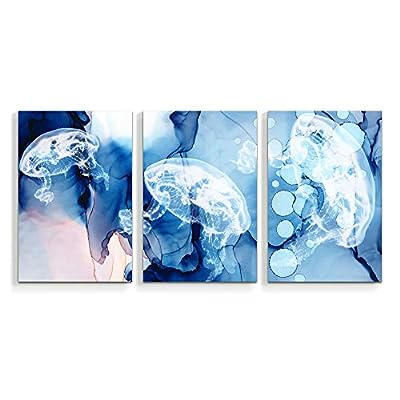 You’ve heard of monkeys in space. You have heard of dogs in space. You may have even ants in space. Did you know that jellyfish have been to space too? NASA started sending jellyfish to space aboard the Columbia space shuttle in the 1990s. Why? Well, to test how they reacted to a zero-gravity environment. I’m sure you’re still asking why. Well, that’s because of the similarities between humans and jellyfish. That’s right, we actually have a few similarities with jellyfish in regard to how we orient ourselves during space travel. Both humans and jellyfish rely on gravity-sensitive calcium crystals to maintain our senses of direction and balance. These crystal are located inside of the inner ear for humans, and along the bottom of the bodies of jellyfish. Essentially, studying how jellyfish react to space travel helped us immensely in figuring out how humans fare! Did you enjoy these jellyfish wall art facts?

Jellyfish are some of the most interesting creatures the world has to offer. Floating, water-filled masses that drift with the motion of the ocean. Deadly tentacles that have the ability to demobilize grown humans. Oh, and on top of that? Their populations are growing rapidly. How do you feel about the possibility of running into a swarm of jellyfish while out on the beach one summer? Does it fill you with dread? Maybe you’re filled with excitement? However you feel about them, we hope you enjoyed these jellyfish wall art facts!