When you think of the arctic, which animal do you most closely associate with it? If you think like we do, you’d probably saw the polar bear! The largest bear in the world and the Arctic’s foremost predator, polar bears truly symbolize the wild and unpredictable nature of the Arctic tundra. The Latin name for the polar bear is “Ursus Maritimus,” directly translating to “sea bear.” This name perfectly describes the polar bear, which spends much of its time in or around the sea. Within the United States, Alaska is home to two of the most common polar bear species. Do you want to know more about the polar bear? Read below for some polar bear wall art facts. 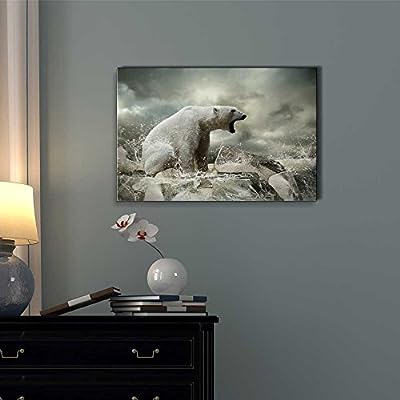 Polar bears are renowned for being one of the largest carnivores on land. Much like many other animal species, polar bears exhibit sexual dimorphism. In other words, both sexes of polar bear differ in size. Male polar bears range from 8-10 feet in length, with females ranging from 6-8 feet. Males typically weight more than 3 times the amount that females do; males weigh in at around 500-1700 pounds while females weigh in at around 300-650 pounds. Polar bears evolved during the Pleistocene Era from the much bigger Asian Brown Bear around 150,000 years ago. Like most forms of life, polar bears have progressively gotten much smaller over the course of its evolution. According to scientists, the largest polar bear ever document was found in Alaska in 1960. It weight 2,000 pounds and stood at around 12 feet tall. Read below for more polar bear wall art facts. 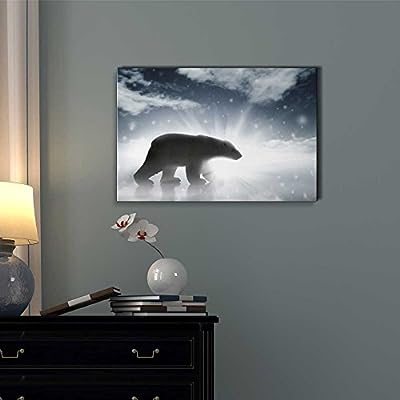 Thanks to evolution, polar bears have only become more and more accustomed to their freezing environment. Naturally, polar bears have the thickest fur of any bear species in the world. Composed of two later, this coat provides all the protection a polar bear needs to survive. The layer closest to the body, the undercoat, is made up of thick hair that retains heat. The outer layer provides insulation and repels could water and ice from touching the skin. This outer layer of hair resembles thick, furry tubes which trap air for insulation inside. During the summer months, polar bears molt and grow a new coat. Underneath their fur, polar bears have dark black skin which absorbs sunlight. Underneath the skin is a 4-inch later of blubber. This blubber increases a polar bear’s buoyancy, making it easier for it to swim. Read below for more polar bear wall art facts. 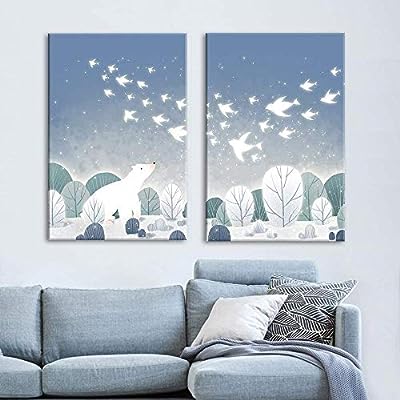 Polar bears are carnivores who, on occasion, eat vegetation. As the apex predator in the arctic, polar bears occupy the very top level of the food chain and have no natural predators. Their major source of sustenance is the ringed seal, but they also hunt bearded seals, hooded seals and harp seals. Once a seal is captured, polar bears devour its fat and skin first and leave the meat and bones for animals like foxes and ravens. Wondering why the fat is eaten first? Well, fat is easier for bears to digest. In addition to that, it contains more calories than meat which make the bears feel fuller for longer. Another interesting fact is that the process of digesting protein requires the body to use water; the digestion of fat release water into the body. This allows the metabolism of polar bears to function without the need to constantly drink water, which keeps them hydrated. Polar bears need to consume around 4 pounds of fat daily. 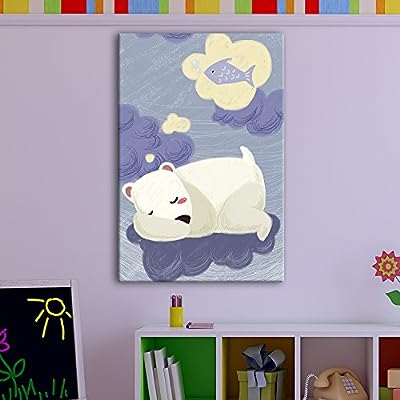 As you already know, polar bears live in the arctic. Specifically, polar bears prefer areas within the arctic that are exposed to consistent wind and water currents. Wondering why? When ice is constantly exposed to both wind and water, it undergoes a melting an re-freezing process. Essentially, ice never stays solid permanently in these environments. This is important because areas like this have a higher amount of seals, which is the preferred meal for polar bears. Although polar bears do spend time on land, they usually devote all of their time to hunting seals, which brings them miles away from solid land. Read below for more polar bear wall art facts. 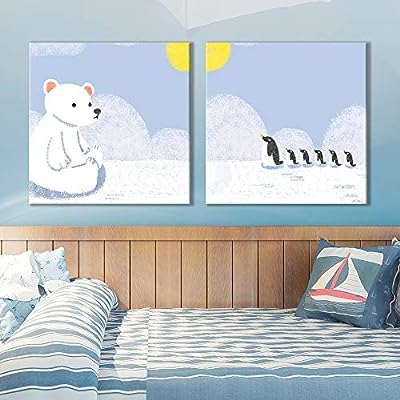 Polar bears are not pack animals, instead they tend to lead solitary lives. The only exception to this rule is mothers raising cubs and pairs of polar bears that are planning on breeding. Mothers are very affectionate toward their cubs and enjoy watching over their cubs playing with each other. Many bears choose to congregate over large, dead animals like whales but tend to scatter afterward. Polar bears are not territorial, but some aggression does occur when males are competing for female breeding rights or fighting over food. Polar bears have the ability to communicate with one another by growling, snorting, panting and loudly closing together their rows of teeth. Cubs vocalize more than adults do. Grown male polar bears tend to forgo vocalization with other males, and often like to initiate a play-fight instead. Grown male polar bears initiate this play-fighting by approaching other males with their heads down and without making eye contact. Once play-fighting starts, both bears stand on their hind legs and try to push the other over. Did you enjoy reading these polar bear wall art facts?

Polar bears are one the most majestic, yet dangerous creatures on earth. Now that you know more about them, how do you feel? Are you amazed by the harsh conditions that they manage to live in? Are you disgusted by the amount of fatty blubber that they eat? Do you wish you could see a polar bear duo play-fight? Well, whatever you feel we hope you learned something by reading this blog! Thanks for reading these polar bear wall art facts!