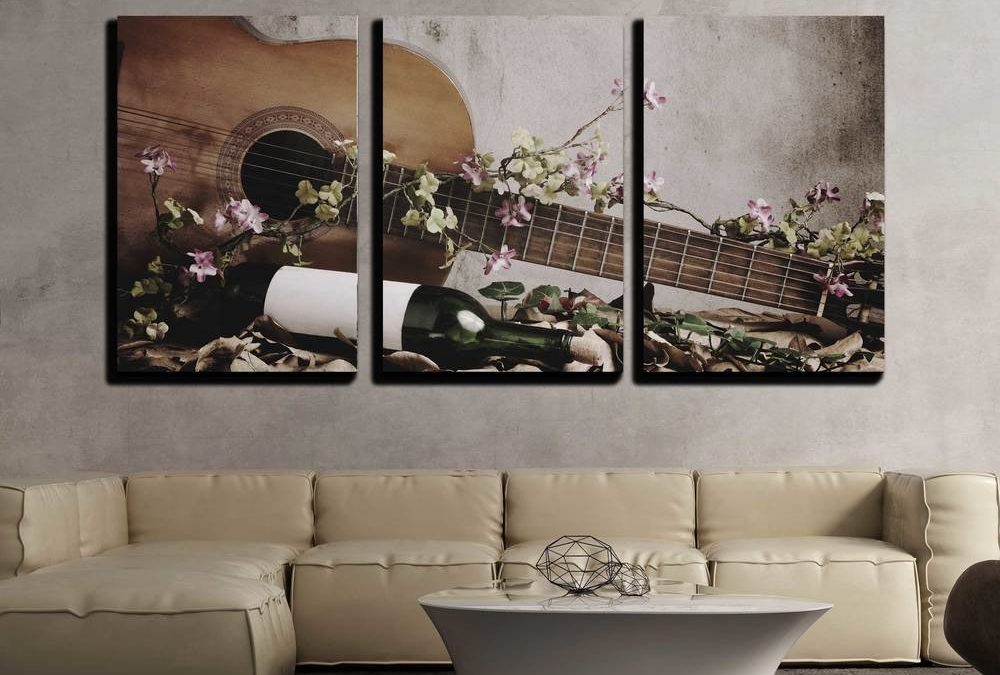 Is there a more iconic instrument that is emblematic of music than the guitar? The guitar is a stringed instrument that creates sounds from the resonating vibrations of its strings. Guitars are fretted instruments. This means that they have wires on the finger board that are used to strum. This is is in opposition to other stringed instruments like the violin, which has strings usually aren’t meant to be strummed and plucked like those of a guitar. Guitars comes in a variety of types including: classical (nylon strings with a die neck), acoustic (steel strings and a thinner neck),  electric (utilizes electronic pickups and amplifiers to forego a large hollow body), and bass (similar to electric, but plays lower notes). The guitar is one of the most popular instruments in the world. Interested in knowing more? Read below for some fun guitar wall art facts. 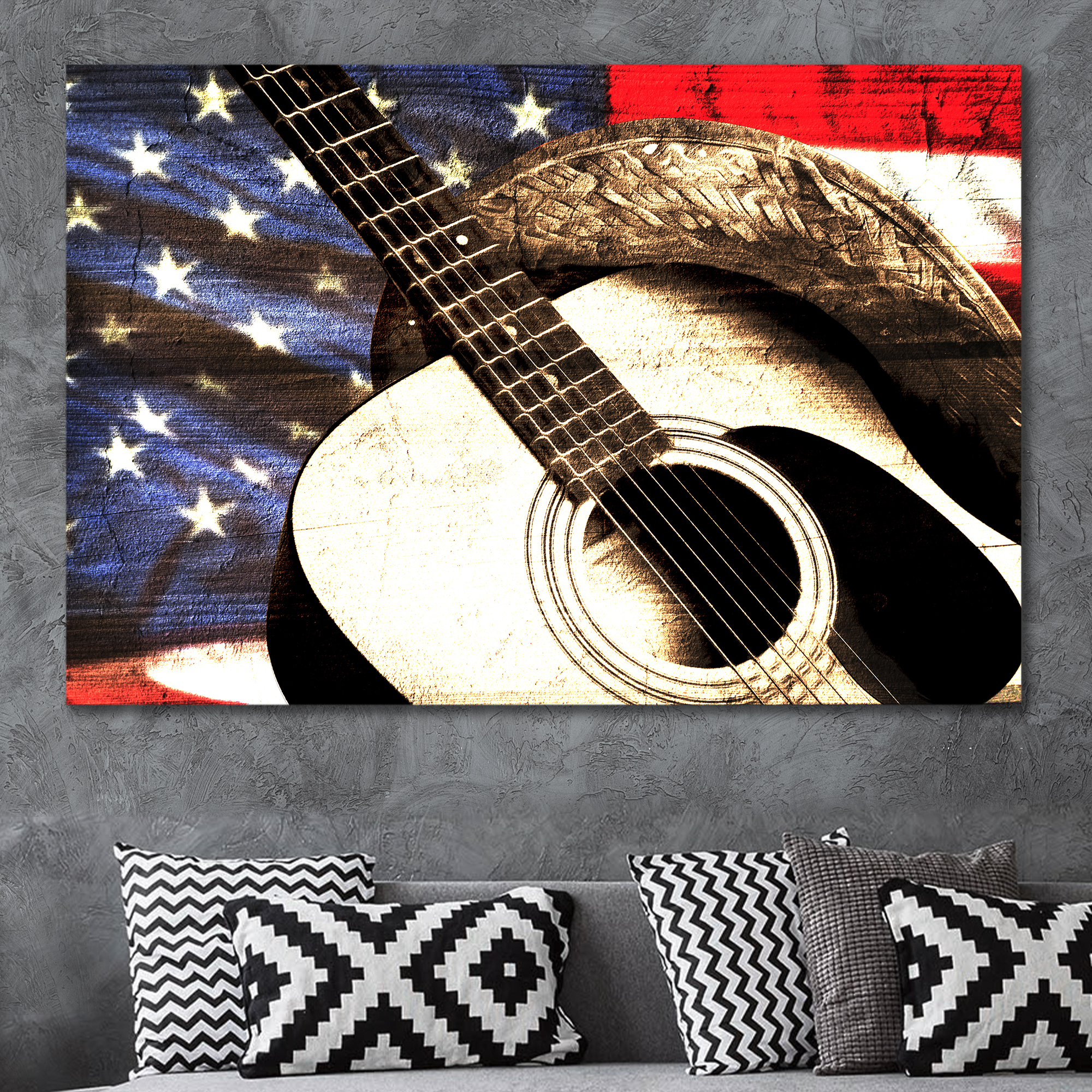 The modern guitar is only a few hundred years old. That said, the human race has been using early versions of the guitar for nearly as long as instruments have existed. Did you know that the first guitar was created in Ancient Egypt? That was nearly 3,500 years ago! The first guitar belonged to a well-known singer named Har-Mose. His guitar was made from a polished type of cedar made from trees native to Egypt. The soundboard was made from animal rawhide, and featured three strings. It even had a plectrum device (guitar pick) attached to it via a thin cord. Interested in seeing this guitar? It’s still in Egypt today! It’s time to put the Archaeological Museum in Cairo on your bucket list! Read below for more guitar wall art facts. 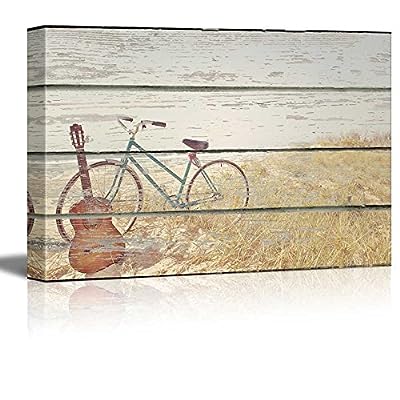 Have you ever wondered how big the world’s largest guitar is? We haven’t either. But, for your reading knowledge, the world’s largest guitar is around 43 feet long. Officially certified by the Guinness Book of World Records, this guitar is around the length of a bus! Usually when things are this big, they tend to be purely for aesthetics. This guitar, however, was created to be completely functional. Each string actually delivers the correct pitch! Interested in knowing who made this thing? The guitar was created by the Academy of Science and Technology in Texas. The guitar took a year to build and weighs over 2,000 pounds. How many people do you think it would take to play this guitar? Read below for more guitar wall art facts. 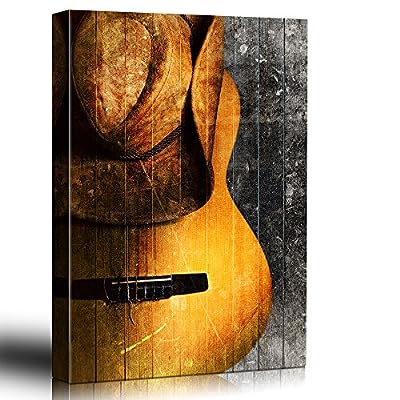 So the world’s biggest guitar exists. Naturally, you’d expect a small one to exist as well, right? The world’s smallest guitar is only 1/100,000 of a meter long. To put this into perspective, this guitar is the size of a single cell! So unless you have microscopic fingers, you probably can’t play this instrument naturally! This guitar was created by researchers at Cornell University in New York. It’s a double-cutaway style guitar that actually has strings which are technically possible to strum (using special equipment, of course). There is one problem, however. The guitar is so small that the resonating frequencies created from strumming the guitar can’t be heard by the human ear! So what is the point of a tiny guitar that nobody can hear? Well, it serves as an interesting fact to put into a blog, that’s for sure! Read below for more guitar wall art facts. 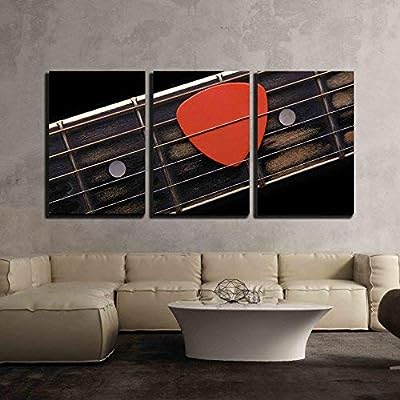 Now that you know about the world’s largest and smallest guitars, are you interested in knowing about the most expensive? A stratocaster guitar, created by fender, is the most expensive guitar ever sold. Sold at auction in order to raise money for victims of the 2004 Indian Ocean tsunami, the white stratocaster cost Fender about $20,000 to produce. $20,000 doesn’t sound that expensive, does it? That’s because this guitar featured some pretty significant decorations. Wondering what they were? Mick Jagger, Keith Richards, Eric Clapton, Brian May, Jimmy Page, David Gilmour, Jeff Beck, Pete Townsend, Paul McCartney, Sting and Bryan Adams all added their signatures to it! These signatures made the price of this guitar balloon up to 2.8 million! The guitar was subsequently privately purchased, with the proceeds benefiting the tsunami victims. Read below for more guitar wall art facts. 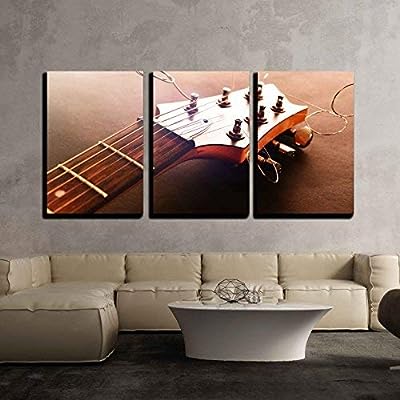 The Fender stratocaster mentioned above was valuable due to the array of signatures it featured, but did you know there are even more luxurious guitars out there? In 2015, Gibson, one of the world’s foremost guitar manufacturers, revealed a guitar that nearly equaled the 2004 stratocaster in price. Instead of signatures inflating the cost, it was adorned with expensive materials. Made in a collaboration with popular jewelry designer Aaron Shum and musician and jewelry designer Mark Lui, this guitar was named the “Eden of Coronet.” This guitar was covered in more than 400 diamonds in addition to 1.6 kilograms of 18 karat gold. Did you enjoy reading these guitar wall art facts?

Guitars are one of the most popular instruments in the world, and it seems like they won’t be losing their luster anytime soon. What do you think about these crazy facts? Surprised that a guitar as long as a 18-wheeler exists? Are you shocked that one as a small as a cell was made? Maybe you’re interested in getting a collector’s edition guitar that’ll remind you of the famous Fender 2004 stratocaster. However this article made you feel, we hope you enjoyed reading these guitar wall art facts!